Almost 100 civil society organisations have written to EU leaders calling for better training and clear codes of conduct for all events following incidents that were disrespectful or discriminatory towards women - and in particular women of colour.

The letter, drafted by the European Network on Debt and Development (Eurodad), was prompted by an incident during a panel event at the European Development Days (EDDs) in June at which Green MEP Reinhard Bütikofer made concluding remarks deemed “very disrespectful” to its Director, Jean Saldanha. A video of this event has since been viewed online more than 10,000 times. 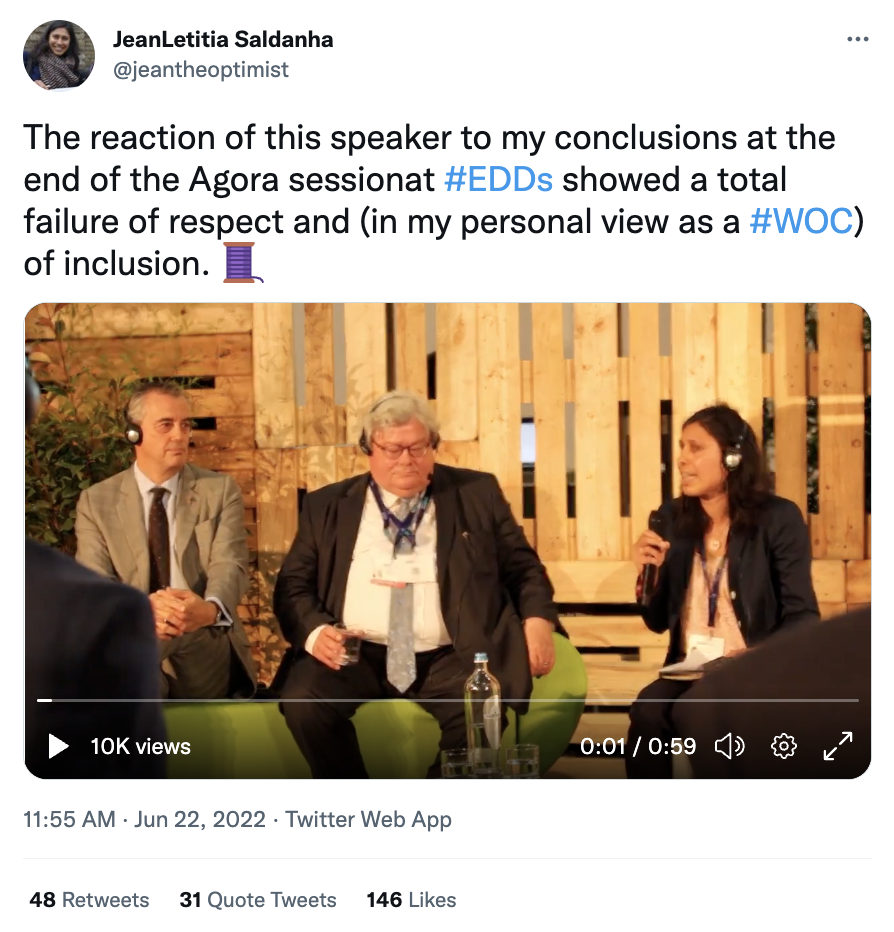 The letter has been sent to several EU leaders, including Ms Jutta Urpilainen, the Commissioner for International Partnerships, Helena Dailli, European Commissioner for Equality, and Vula Tsetsi, Secretary General of the Greens/ EFA. The full text can be read here.

Jean Saldanha, Director of Eurodad, said: “I was shocked by the disrespectful attitude of Mr Bütikofer during our event. But this is not about the actions of just one individual. This is symptomatic of a wider culture in which women panelists are frequently patronised and discriminated against. When discrimination is encoutered by women of colour this further aggravates the problem.

“There has been work done over the past decade to try to close the gender gap at EU events and bring an end to “manels” where women were at worst outright excluded and at best marginalised. But getting women onto panels means very little if they are belittled when they are there. More needs to be done and a code of conduct, instituted by EU leaders, is a good place to start.”

The letter, which has been signed by organisations including the European Network against Racism, Transparency International EU and WeMove Europe, also states:

“At the same time that this incident took place at the EDDs, Ms Vula Tsetsi, Secretary General of the Greens/EFA group in the European Parliament hosted the group’s civil society day and explicitly called out European politicians excluding or dismissing expertise from the global south, persons of colour and women.

“There are many more instances of similarly disrespectful behaviour towards women in various spaces involving EU institutions and bodies in Brussels. In particular when women demonstrate their agency, express a difference of opinion or are simply outspoken.”

The letter goes on to call for EU institutions and bodies to develop a structural plan for mandatory unconscious bias training of all EU institutions and bodies’ office holders and civil servants on these issues. It calls for clear codes of conduct for all EU events to be instituted for the prevention, reporting and redress of harassment, discrimination or disrespect of women, as well as other forms of discrimination. Experts from civil society, including women of colour, must be engaged in the drafting of such codes of conducts, and they should be published and shared with event organisers and speakers.

Notes to editors:
You can watch the full video of the event at the EDDs below

APMDD and Eurodad reaction to the Finance in Common (FiC) Summit