In the past year, scandal after scandal has exposed companies using loopholes in the tax system to avoid taxation. Now more than ever, it is becoming clear that citizens around the world are paying a high price for the crisis in the global tax system, and the discussion about multinational corporations and their tax tricks remains at the top of the agenda. There is also a growing awareness that the world’s poorest countries are even harder impacted than the richest countries. In effect, the poorest countries are paying the price for a global tax system they did not create.

A large number of the scandals that emerged over the past year have strong links to the EU and its Member States. Many eyes have therefore turned to the EU leaders, who claim that the problem is being solved and the public need not worry. But what is really going on? What is the role of the EU in the unjust global tax system, and are EU leaders really solving the problem?
Country comparison table 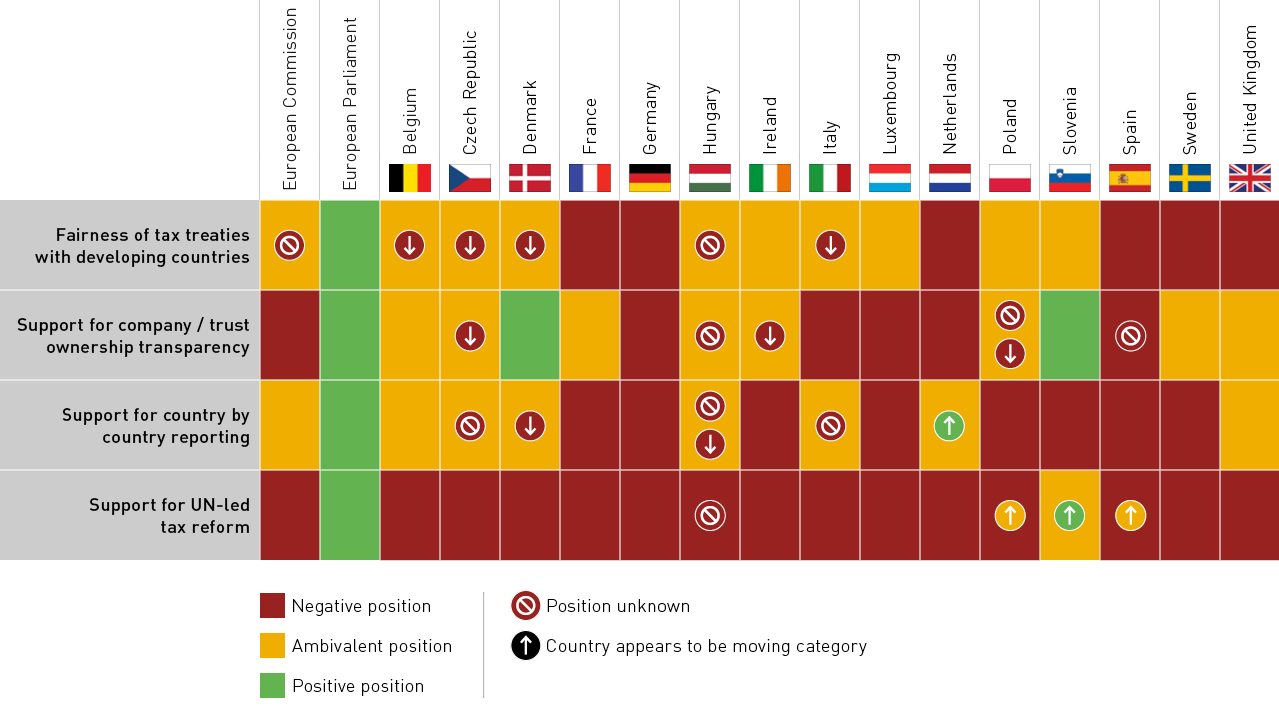 This report – the third in a series of reports – scrutinises the role of the EU in the global tax crisis, analyses developments and suggests concrete solutions. It is written by civil society organisations (CSOs) in 14 countries across the EU. Experts in each CSO have examined their national governments’ commitments and actions in terms of combating tax dodging and ensuring transparency.

Each country is directly compared with its fellow EU Member States on four critical issues: the fairness of their tax treaties with developing countries; their willingness to put an end to anonymous shell companies and trusts; their support for increasing the transparency of economic activities and tax payments of multinational corporations; and their attitude towards letting the poorest countries have a seat at the table when global tax standards are negotiated. For the first time, this report not only rates the performance of EU Member States, but also turns the spotlight on the European Commission and Parliament too.

This report covers national policies and governments’ positions on existing and upcoming EU level laws, as well as global reform proposals.
Overall, the report finds that:

• Although tweaks have been made and some loopholes have been closed, the complex and dysfunctional EU system of corporate tax rulings, treaties, letterbox companies and special corporate tax regimes still remains in place. On some matters, such as the controversial patent boxes, the damaging policies seem to be spreading in Europe. Defence mechanisms against ‘harmful tax practices’ that have been introduced by governments, only seem partially effective and are not available to most developing countries. They are also undermined by a strong political commitment to continue so-called ‘tax competition’ between governments trying to attract multinational corporations with lucrative tax reduction opportunities – also known as the ‘race to the bottom on corporate taxation’. The result is an EU tax system that still allows a wide range of options for tax dodging by multinational corporations.

• On the question of what multinational corporations pay in taxes and where they do business, EU citizens, parliamentarians and journalists are still left in the dark, as are developing countries. The political promises to introduce ‘transparency’ turned out to mean that tax administrations in developed countries, through cumbersome and highly secretive processes, will exchange information about multinational corporations that the public is not allowed to see. On a more positive note, some light is now being shed on the question of who actually owns the companies operating in our societies, as more and more countries introduce public or partially public registers of beneficial owners. Unfortunately, this positive development is being somewhat challenged by the emergence of new types of mechanisms to conceal ownership, such as new types of trusts.

• Leaked information has become the key source of public information about tax dodging by multinational corporations. But it comes at a high price for the people involved, as whistleblowers and even a journalist who revealed tax dodging by multinational corporations are now being prosecuted and could face years in prison. The stories of these ‘Tax Justice Heroes’ are a harsh illustration of the wider social cost of the secretive and opaque corporate tax system that currently prevails.

• More than 100 developing countries still remain excluded from decision-making processes when global tax standards and rules are being decided. In 2015, developing countries made the fight for global tax democracy their key battle during the Financing for Development conference (FfD) in Addis Ababa. But the EU took a hard line against this demand and played a key role in blocking the proposal for a truly global tax body.
Not one single EU Member State challenged this approach and, as a result, decision-making on global tax standards and rules remains within a closed ‘club of rich countries’.
A direct comparison of the 15 EU countries covered in this report finds that:

• France, once a leader in the demand for public access to information about what multinational corporations pay in tax, is no longer pushing the demand for corporate transparency. Contrary to the promises of creating ‘transparency’, a growing number of EU countries are now proposing strict confidentiality to conceal what multinational corporations pay in taxes.

• Denmark and Slovenia are playing a leading role when it comes to transparency around the true owners of companies. They have not only announced that they are introducing public registers of company ownership, but have also decided to restrict, or in the case of Slovenia, avoided the temptation of introducing, opaque structures such as trusts, which can offer alternative options for hiding ownership. However, a number of EU countries, including in particular Luxembourg and Germany, still offer a diverse menu of options for concealing ownership and laundering money.
• Among the 15 countries covered in this report, Spain remains by far the most aggressive tax treaty negotiator, and has managed to lower developing country tax rates by an average 5.4 percentage points through its tax treaties with developing countries.

• The UK and France played the leading role in blocking developing countries’ demand for a seat at the table when global tax standards and rules are being decided.

To read a summary of the report, please click here.