New figures on climate finance: The good, the bad, the disturbing and what's missing

Analysis of the 2019 Climate Finance data released by the OECD shows developed countries are still falling short of meeting the US$ 100 billion per year climate finance goal.

This September, the Organisation for Economic Co-operation and Development (OECD) released its regular report ‘Climate Finance Provided and Mobilised by Developed Countries: Aggregate Trends Updated with 2019 Data’. The data tells a story of business as usual.

Current estimates of climate financing needs range between “US$1.6 trillion to US$3.8 trillion annually between 2016 and 2050”. This global climate financing gap prevents developing countries from transitioning to net-zero economies, bars vulnerable communities from being able to carry-out adaptation activities and blocks efforts to address ongoing losses and damages.

Where is the data from?

What does the report show?

Total climate finance in 2019 amounts to US$ 79.6 billion. By their own admission, the finance provided and mobilised by developed countries for developing countries fell short of the US$ 100 billion target.

There is no information in the report on the actual disbursement of climate finance, so it’s not clear how much actually reached projects on the ground. According to Aid Atlas, only 60.4 per cent of climate-related development finance was disbursed between 2002 and 2018. However, it is not clear how far this trend on climate-related development finance applies to pure climate finance flows.

Total adaptation finance grew in 2019 by 20 per cent, amounting to US$ 20.1 billion. While this is not enough to meet the aim in the Paris Agreement to balance finance for adaptation and mitigation, it is an important political signal ahead of COP26, where a review of the Adaptation Fund will take place.

Moreover, public grants financing stood at 27 per cent in 2019, amounting to US$ 16.7 billion. This is the first significant increase in 3 years but is still too little. Public climate finance (including adaptation finance) to Least Developed Countries (LDCs) grew to US$ 15.4 billion. As a priority group of countries, this is a trend in the right direction although still not enough. Especially given that many of these countries are contending with the economic and fiscal impacts of the Covid 19 pandemic, whilst facing ongoing climate impacts.

Figure 1.7 Climate finance provided and mobilised to SIDS and LDCs (US$ billion) 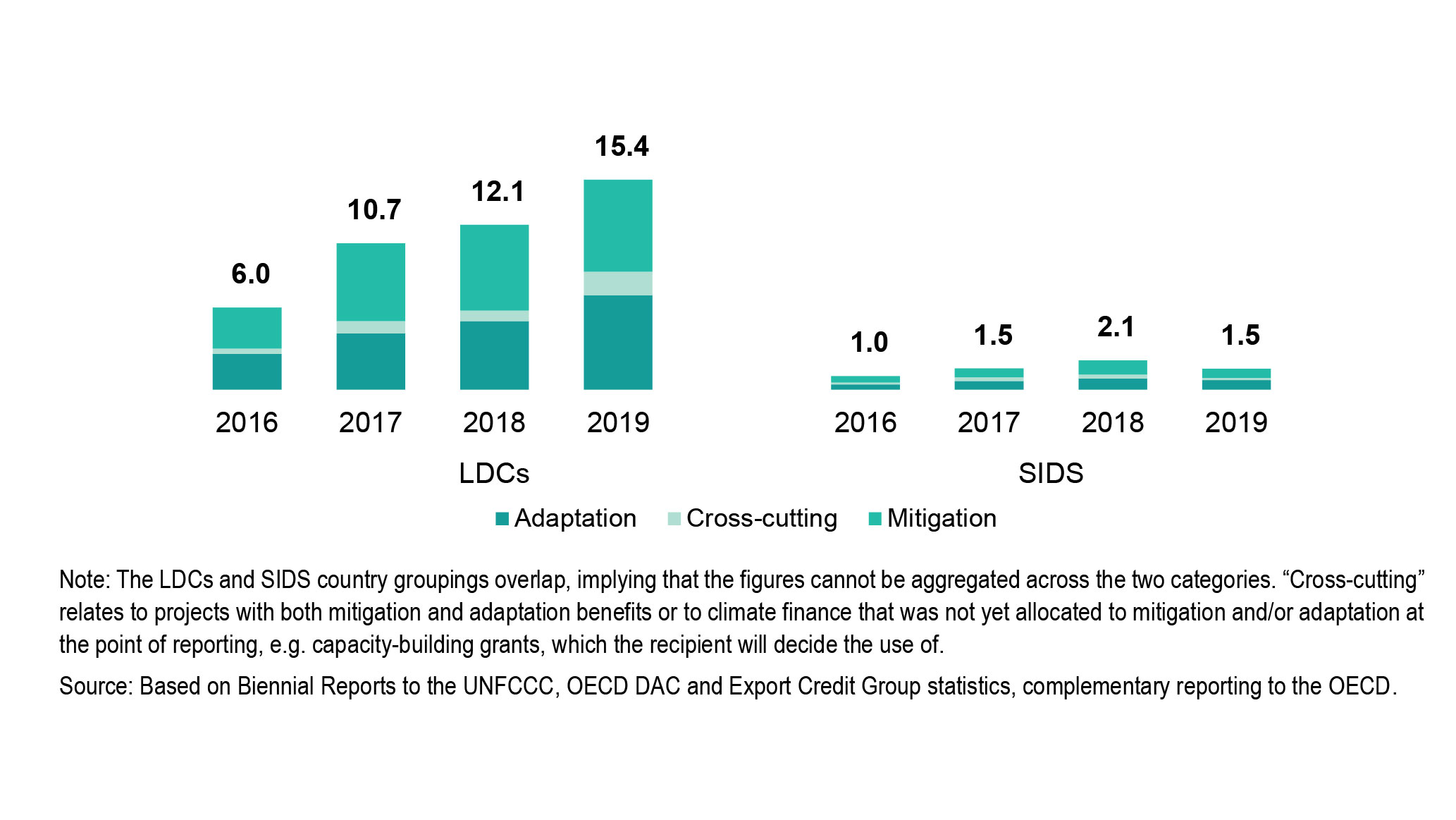 Conversely, public climate finance (including adaptation finance) for Small Island Developing States (SIDS) fell in 2019 to US$ 1.5 billion, reflecting 2017 levels. Climate financing for SIDS has never been as high as for LDCs, but given their susceptibility to climate impacts, it’s not good to see finance for this country grouping fall.

What is more, public loans in 2019 (concessional and non-concessional) accounted for a staggering 71 per cent of climate finance in 2019. Whilst this is a 5 per cent fall in the use of loans, developed countries are still using this debt-generating instrument far too much.

To top it off, total mitigation finance still accounts for two thirds of total public climate finance, amounting to US$ 50.8 billion. The Climate Vulnerable Forum of countries (CVF) is calling for US$ 50 billion a year, per year, until 2024 for mitigation AND adaptation = US$100 billion annually. Developed countries are clearly falling short of climate vulnerable countries’ expectations in multiple ways.

Unsurprisingly there's also no data on finance to address losses and damages (L&D), despite climate-vulnerable developing countries repeatedly making it clear that such finance is a significant priority for their citizens and residents. A key priority for these countries at COP26 will be to secure finance to address loss and damage, and for this to be a part of the new global climate finance goal.

Climate related export credits grew in 2019 to US$ 2.6 billion, reflecting an ongoing trend in this area. While currently small, relative to climate finance as a whole, it is a worrying trend. It remains to be seen what 'green projects' were financed in 2019 using export credits. Watch this space for a longer Eurodad briefing on export credits.

Another trend to watch is the direction of leveraged private finance. The idea that private finance leveraged by developed countries can help to shift finance ‘from billions to trillions’ and fill the financing gap has long been promoted by international financial institutions and multilateral development banks. However, in 2019 private finance mobilised by countries for climate finance fell by 4 per cent.

Looking ahead to COP26

As has already been made clear, COP26 will not be considered a success unless developed countries deliver on their financial commitments. COP26 is when a collective climate finance delivery plan will be presented by developed countries, and will also see the formal discussion on the new long-term climate finance goal begin. The climate finance delivery plan needs to be driven by the experiences and data of what the impacts are and what the needs are. What is clear from the OECD data is that there is a stark difference between the identified financing needs of climate vulnerable countries, and where finance actually goes, and that global climate finance needs are not being met.

The next five years must mark a new chapter in climate finance by prioritising financial grants, providing finance to address losses and damages, increasing adaptation finance, ensuring genuine access to climate finance, and above all, finance must be gender-responsive.