The IMF in the Arab World: lessons unlearnt

This report surveys the IMF’s impact on post revolutionary Arab states by documenting the history of IMF involvement in the region. It then traces the change in IMF rhetoric and practice before and after 2011 in four Arab countries: Tunisia, Morocco, Jordan, and Egypt. 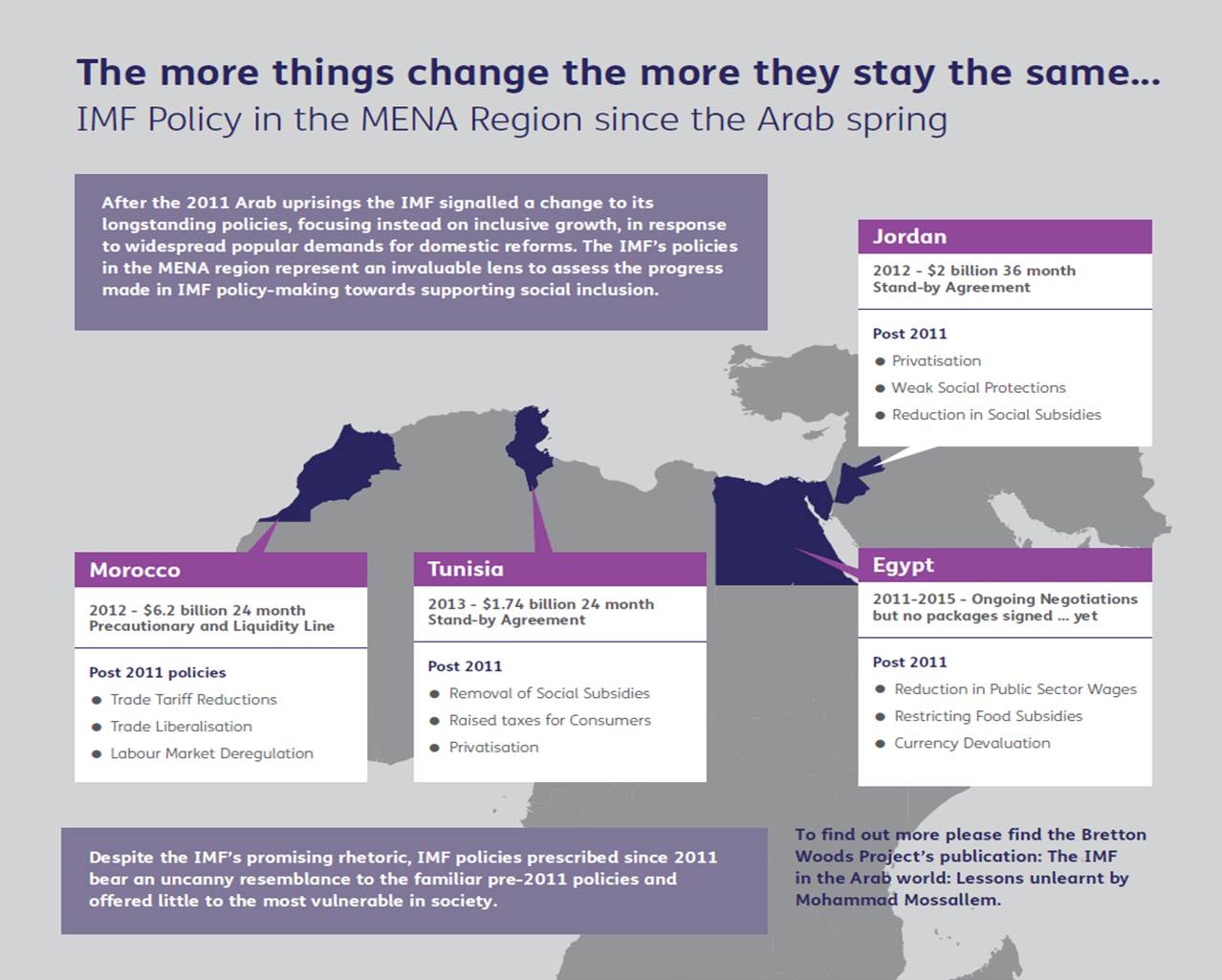 The IMF has a track record in enforcing aggressive liberalisation in trade and investment alongside contractionary policies such as austerity measures and regressive taxation with negative impacts on growth, employment and inequality. However, documents released by the IMF since the 2008 Financial Crisis have indicated that the organisation was revising its stance by depicting itself as a more flexible lending institution (Grabel 2011; Gallagher 2011 Vernengo & Ford 2013). This alleged policy shift became more evident after the 2011 Arab uprisings, which many have attributed to the failure of the economic and social policies promoted by international financial institutions (IFIs). Post 2011, country-specific strategies produced by the IMF for Arab countries consistently highlighted issues of social and economic inclusion as key priorities of IMF policy, indicating that they had broken with past practice and would now place more emphasis on policies aimed at inclusive growth (Hanieh 2014).

The post-Arab uprisings moment provides an opportunity to evaluate the potential change of IMF policies in response to its accusation of being responsible for the series of financial crises that plagued the global economy (Ban & Gallagher 2015). In May 2011, a group of international institutions and governments gathered under the umbrella of the Deauville Partnership and pledged up to $40 billion in loans and other assistance towards what they termed the “Arab Countries in Transition” (ACT)1. By 2012, the IMF had signed four loan agreements in the region: two year loan packages with Morocco and Jordan, an emergency credit line with Yemen and a precautionary financing arrangement with Tunisia. Egypt has gone through two controversial rounds of negotiations with the IMF on a potential loan program, neither of which ultimately resulted in a loan.

This report surveys the IMF’s impact on post revolutionary Arab states by documenting the history of IMF involvement in the region. It then traces the change in IMF rhetoric and practice before and after 2011 in four Arab countries: Tunisia, Morocco, Jordan, and Egypt. These countries were selected in particular because they have adopted extensive structural reforms under the auspices of the IMF and were often put forward by IFIs as successful reformers (Harrigan & El Said 2014). It will be demonstrated that in practice IMF interventions post-Arab uprisings replicated the same policies that had proven to be unsuccessful pre 2011. As illustrated in the case studies, these policies include: (i) the focus on fiscal austerity and subsidy reduction; (ii) aggressive privatisation as well as trade and investment liberalisation; and (iii) the failure to adequately promote employment-intensive investment by persisting with the export growth model.

In light of these case studies, the implications of the IMF’s experience in the region are considered, concluding with recommendations for the future role of the IMF in the developing world, including Arab states.