Haiti 10 years after the earthquake: the fight for social and economic justice continues 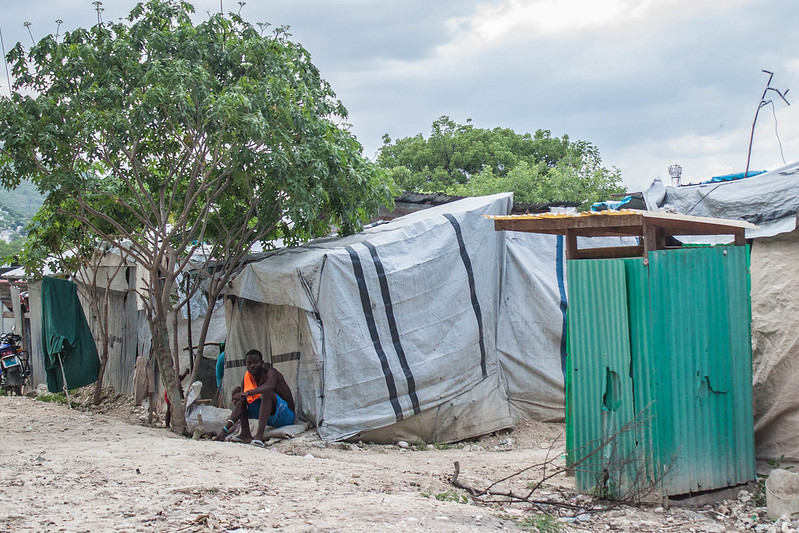 Photo: Delmas camp for people internally displaced by the earthquake. I Fresnillo/ Dec 2013

From debt relief to oil debt

When the earthquake struck, I was with a group of European debt activists gathered by Eurodad in a Debt strategy meeting in Brussels. We reached out to our colleagues from PAPDA (Haitian Platform for an alternative development), with whom we’d been campaigning for the abolition of former Haitian President Duvalier’s odious debt and recovery of stolen assets.

We quickly organised a solidarity campaign for debt relief for Haiti. We took the chance to explain why debt relief was not only a matter of solidarity, but one of justice, as Haiti had been suffering from international interference and a legacy of odious debts since its independence. This included unjust and harmful conditionality from IMF and World Bank loans.

Ultimately, Haiti received debt relief before and after the earthquake under the HIPC and MDRI processes1 and in some cases this was topped up with additional cancellations of bilateral debt from Venezuela, France, Italy, Norway and Finland. External public debt stocks were reduced by 60 per cent, reaching a minimum of US$ 775 million. However, debt service remained a challenge, as Haiti had - and still has - one of the lowest domestic resource mobilisation rates in the western hemisphere: according to the World Bank, “at just 14 percent of GDP, domestic tax revenues finance less than three-quarters of total public spending” (2018).

External public debt also increased further due to the Petrocaribe program with Venezuela. Under this scheme, the Haitian government could purchase oil from Venezuela at 60% of the price, deferring the rest as debt, which incurred one per cent interest over 25 years. The Haitian government was supposed to use the revenue for development projects. However, much of the money disappeared through corruption, which led to massive demonstrations in 2018.

At the same time, following the recommendations of the IMF, the Haitian Government reduced fuel subsidies, resulting in drastic price hikes of up to 51 per cent. In March 2019, the Haitian government secured a new IMF loan of US$ 299 million, which included further conditionalities on deficit reduction.

External public debt is now higher than before the HIPC/MDRI debt relief, reaching US$ 2.21 billion in 2018. Increasing debt service (four times higher than in 2011), decreasing donor support and a low capacity to generate revenue, has placed the Haitian government in deadlock, not being able to pay even the most basic bills such as electricity..

From disaster aid to aid disaster

Along with debt relief, donors from around the world pledged massive amounts of humanitarian and reconstruction aid. Thousands of humanitarian workers were deployed to Haiti and NGOs raised more than US$3 billion within a year of the disaster. Additionally, governments and multilateral agencies promised US$13.34 billion for the 2010-2020 period. Unfortunately, the Office of the Special Envoy to Haiti, who kept track of disbursements, ended its surveillance in 2012. At that time, only 48.2 per cent of what was promised had been disbursed, a total of US$6.43 billion.

Since then, it has proved difficult to ascertain how much of the total pledged has actually been disbursed. According to the World Bank, the total official development assistance and official aid received by Haiti between 2013 and 2017 was US$ 5.3 billion, which falls considerably short of the total resources promised.

More important than the amount of aid money is how it was spent. The promise, expressed by Haiti Special Envoy Bill Clinton in the donors’ conference in New York in 2010, was to Build Back Better. However, in the rush to deliver emergency aid and reconstruction, a lack of coordination and failure to put local actors in the driving seat led too often to inadequate action. The lack of participation of Haitian authorities and CSOs contrasted with the high percentage of foreign companies being awarded reconstruction contracts. EuropeAid, for instance, awarded 76.6 per cent of the value of the contracts in Haiti in 2010 and 2011 to European corporations. In total between 2010 and 2012, 84 per cent of public funds for the reconstruction were managed outside the Haitian administration.

Ten years after the earthquake, around 30, 000 people are still living in camps and 300,000 people live in Canaan, a new informal settlement on the outskirts of Port-au-Prince. Despite the billions of dollars that flooded the country after the earthquake, and the promises to Build Back Better, according to the Humanitarian Needs Overview of the United Nations Office for the Coordination of Humanitarian Affairs (OCHA), 4.6 million Haitians (about 40 per cent of the population) will require urgent humanitarian assistance in 2020, and there are 3.7 million people in acute food insecurity. The political situation does not help economic prospects, according to the IMF and other development institutions.

The 10th anniversary of the earthquake is a good moment for the international community to assess its relationship with Haiti. Untying aid and promoting local and regional procurement are basic principles of effective development that should be prioritised by development agencies, together with the need to extend these principles to any engagement with the private sector in development.

On fiscal and debt management, it is clear that much of the progress made through debt relief has already been lost. Haiti’s recent history starkly highlights the importance of a new approach to debt crisis prevention and the need for a durable resolution that puts people first. That includes binding global rules on responsible lending and borrowing.

1 Debt Relief for HIPC (heavily indebted poor countries) and MDRI (Multilateral Debt Relief Initiative): HIPC and MDRI were initiatives that alleviated the debt owed by some of the world’s most indebted and poorest countries to multilateral institutions and creditor governments.