Last week the Development Assistance Committee (DAC) of the Organisation for Economic Co-operation and Development (OECD) released their preliminary figures on the amount of official development assistance (ODA), or development aid, raised in 2018. Following the OECD’s publication, Eurodad released an initial reaction.

Nothing new under the sun?

In 2018, ODA headline figures took a dive by 2.8 per cent compared to 2017, bringing the development effort of all OECD member states to a meagre 0.31 per cent of gross national income, far below the 0.7 per cent commitment made nearly half a century ago. The inclusion of costs not immediately linked to development needs of recipient countries continue to inflate aid figures and undermine the credibility of the reporting exercise of a scarce but crucial development resource. A particular worry  is the fact that the neediest countries are hit the hardest, with bilateral ODA to the least developed countries falling by 3 per cent. 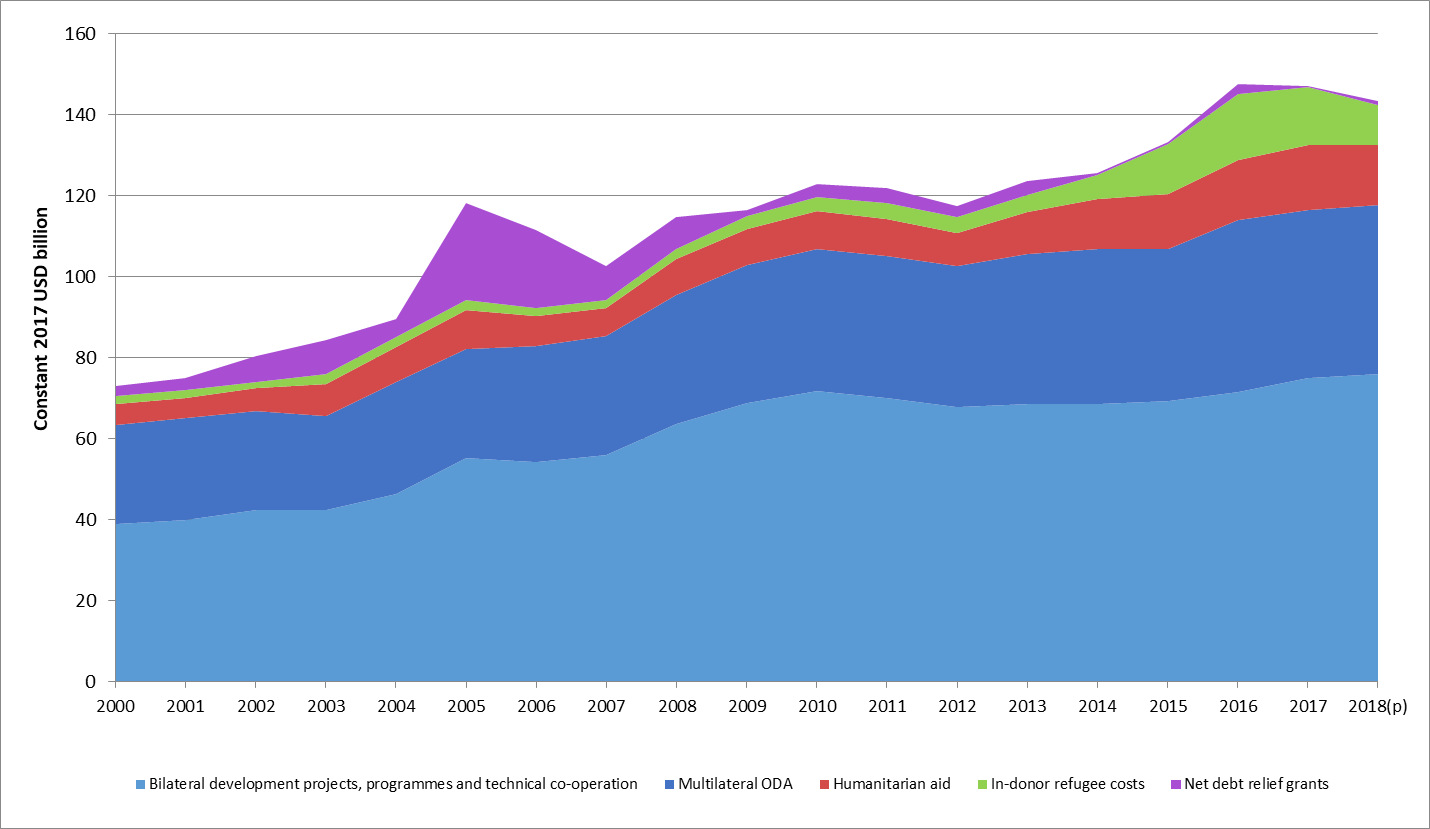 The graph above shows the composition of aid over time. For 2018, it shows that in real terms the decline in ODA was primarily due to a reduction in inflated aid expenditures; such as in-donor refugee costs. The costs associated with the sustenance of refugees during the first 12 months of stay in a donor country declined with nearly 40 per cent compared to 2017, but still account for over 7 per cent of total ODA in 2018. This decrease is linked to the shrinking number of applications for international protection which in turn relates to stricter immigration policies and the externalisation of European borders to developing countries.

The bulk of aid spending - 53 per cent in 2018 - is still delivered in the form of bilateral development projects, programmes and technical assistance. Contributions to multilateral agencies constitute 29 per cent while spending on humanitarian crises amounts to little over 10.3 per cent, down 8.7 per cent compared to 2017. Although humanitarian aid has seen an upward trend over the last years, this decrease is not consistent with increasing funding needs for humanitarian crises.

In short, the 2018 figures do not paint a fundamentally different picture than the year before. Still, only a handful of DAC members reach the 0.7 per cent of gross national income spending target. The fact that 17 DAC members are able to report a modest increase in net ODA and few smaller donors increases in ODA as a percentage of GNI is wiped out by significant decreases in several large donor countries, including G7 members such as the United States, Italy and Germany. Variation of the headline figures is still largely explained by unpredictability of costs that do not actually reflect a genuine effort towards sustainable development and poverty reduction in recipient countries.

What is new, though, is that the OECD changed the rules on how to report on loans issued to developing countries by donors. Until last year, a donor could count the full face-value of a loan as ODA as long as it met a certain threshold of generosity towards a borrower country, the so-called ‘concessionality’ of the loan. Repayments of the principal amount (excluding interest payments) were then later subtracted from a donor country’s gross ODA flows, netting the long-term impact of the loan on a donor’s ODA balance to zero.

One of the weaknesses of this system was that it imposed equal treatment on donors with different levels of generosity allowing donors to evenissue loans above market rates and reporting them as ODA. Under the new rules, the actual financial effort of the donors should be better represented by counting only a percentage of each loan as ODA dependent on how concessional the loan actually is, while repayments are no longer deducted of the headline ODA figure for each donor. Based on this new measure, the decrease in net ODA between 2017 and 2018 seems less dramatic (1,6 per cent versus 2,7 per cent according to the old measure). These new reporting rules change the game mainly for big-lender donors, such as Japan, France and Germany (see graph below). 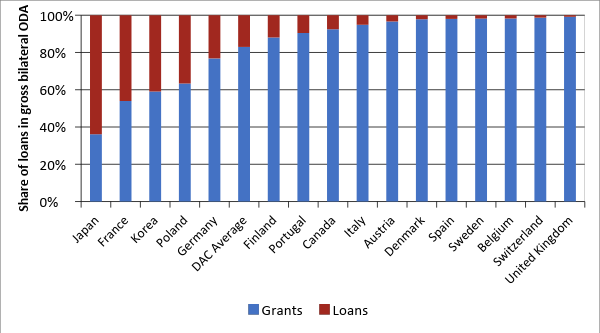 Japan’s ODA, for instance, appears over 40 per cent higher under the new grant equivalent system while it actually went down by 13 per cent in real terms compared to 2017, while countries such as Germany or France, who on average give loans on less generous terms, lose out to the new system. At first sight, this seems like a more consistent and fair way to report on loans, but we have to be mindful of the incentives it gives to donors. The signal should not be to continue shifting ODA from grant-based financing to offering cheap loans to developing countries, especially at a time when developing country debt levels are at a record high and debt crises are lurking around the corner. Instead, without renouncing the importance of sustainable lending, we would prefer to see significant increases in ODA grants – which have a 100 per cent grant equivalent - that are conducive to sectors crucial to achieving poverty eradication such as health and education.

The new frontier in ODA reporting

For now, the new reporting rules apply only to loans, which they were also supposed to do for the support donors are giving to the private sector through so-called Private Sector Instruments (PSI). Despite the fact donors have failed to agree on strict reporting rules for PSI, they are included in the preliminary figures based on two separate approaches donors can choose from. Either they report on the full amount of their contributions to national Development Finance Institutions, or they report the full amount of loans and equity investments made to private entities directly. 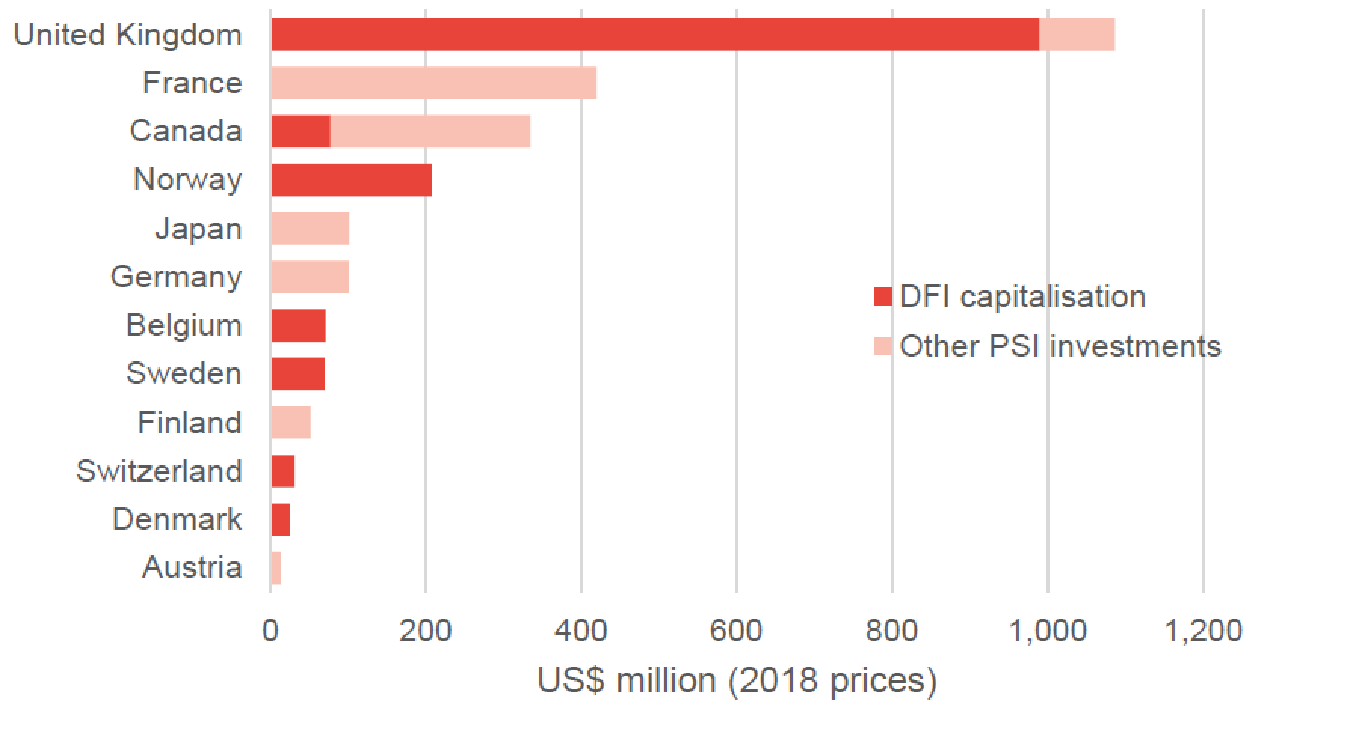 As the graph above shows, only 12 DAC members have reported ODA in the form of PSI to the amount of nearly $2.5 billion. While reporting on PSI still seems spurious and incomplete, their inclusion may have far-reaching implications for the quantity and quality of aid. As even former DAC chairs have pointed out, PSI risk to fail on an essential characteristic of aid – concessionality – and dilute the boundaries between ODA and commercial transactions. Moreover, the risks related to PSI have been broadly covered and documented, while there is currently little evidence on their track record delivering development results. That is why member states should not let these provisional reporting arrangements become permanent by default. In the meantime principled donor agencies and DFIs could use the vacuum left by the DAC to strengthen their own safeguards over PSI activities. Moreover, they should remain engaged in the process to formulate reporting rules that do not incentivise such instruments above other types of highly concessional development aid that often reap greater results for the poorest and most marginalised.

Of course, the nitty gritty of ODA reporting rules should not detract from the main observation that donors are showing an incredible lack of ambition at a crucial time to reach the sustainable development goals. To help the close the financing gap, we need more and better ODA. The current reporting system allows donors to make their efforts look better than they actually are, and risk to divert ODA resources away from what works best. Therefore focusing on the reforming the reporting rules is a critical issue. The OECD DAC is the arbiter of what can and cannot be accounted for as ODA and its member states must enable it to ensure the integrity of what is an essential and unique form of public finance.