The 6th European Union-African Union Summit was held in Brussels last month. This event - which is held every three years is designed to offer a separate platform for dialogue and setting a common political agenda, along with the existing set of policies between the members of the EU and AU.

This year’s summit was framed as a “joint vision for a renewed partnership” between the two blocs. This is an attempt to move past the long history of donor-recipient relations between the two continents as well as a deeper legacy of colonialism.  However, the Summit did not result in  any concrete results. In fact, beyond rebranding already existent commitments, it did not offer anything new. EU countries failed to make concrete commitments to rechannel a significant portion of their Special Drawing Rights (SDRs) to low and middle-income countries; no progress was made on the intellectual property waiver to end vaccine apartheid; and the emphasis on renewed partnership continued in the absence of fresh resources.

The EU-Africa Global Gateway : Repackaging finances  and a lack of transparency

The EU announced 150 billion euros investments under the EU-Africa Global Gateway Investment Package as the highlight of the Summit. However, this is in fact part of the regional plan under the existing EU flagship project, the EU Global Gateway, launched in early December 2021. This is a package of 300 billion euros dedicated to the EU's investment activities, which is supposed to counter the Chinese Belt Road Initiative. Presenting the regional commitment to Africa as a cornerstone of the Summit, was even more strange when considering that President Von Der Leyen had already announced this amount on her recent visit to Senegal.

More importantly, the 150 billion investment amount  dedicated to the EU-Africa Global Gateway led to concerns about transparency. EU diplomats expressed disquiet about the undisclosed sources of this amount, with one calling it a case of magical engineering.  An existing and major critique of the entire EU Global Gateway itself is that the 300 billion euro investment package is a combination and repackaging of existing commitments from European development finance institutions. This is a limitless exercise of rebranding which is open to severe critique.

A closer look at the five pillars of the EU-Africa Global Gateway, activities and planned investments also show that the nature of investments is not radically different from previous initiatives implemented broadly under the European Fund for Sustainable Development and Neighbourhood, Development and International Cooperation Instrument, recently renamed Global Europe. The five pillars include investment in green transition, sustainable growth and decent job creation, digital transitions, health systems and education and training.  Implemented under the auspices of Team Europe, which aims to allocate resources to mitigate against the impact of the pandemic, the long-term impact of these projects is yet to be seen (See Figure 1).  However, mapping the underlying vision of the EU's regional Gateway in Africa can help determine how these projects will shape socio-economic investment of African economies in the near future. 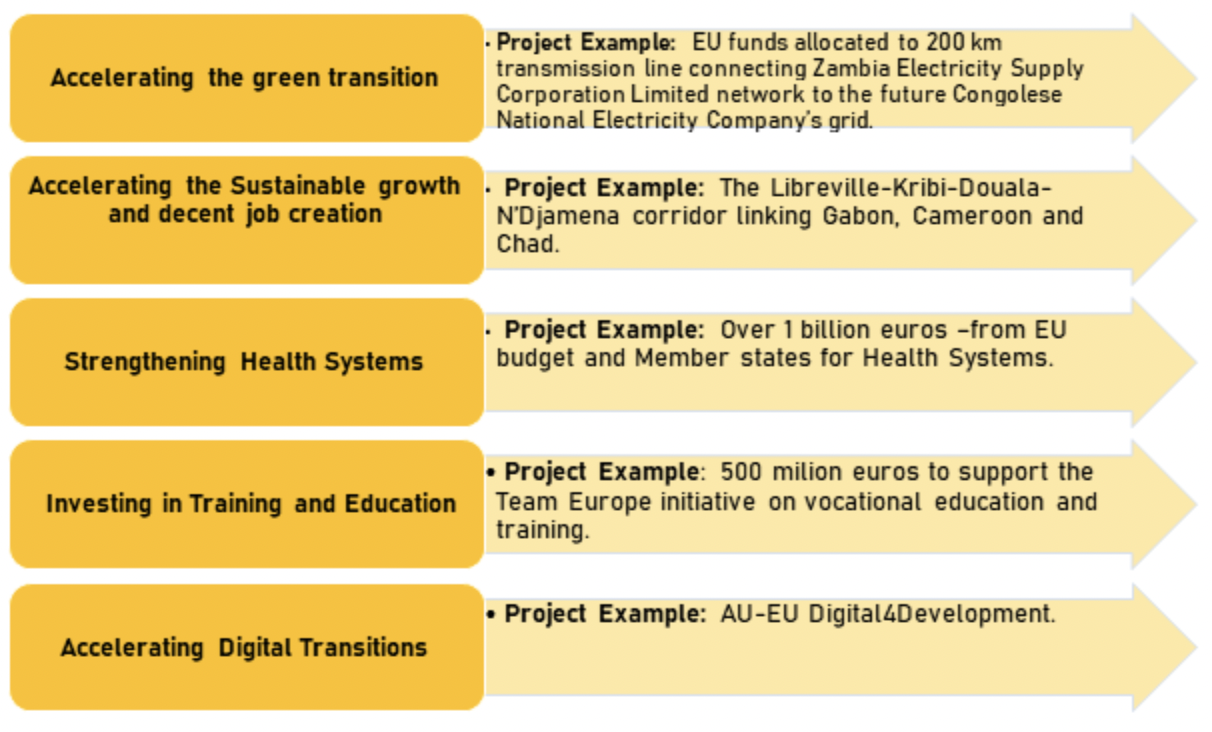 A major goal of the EU-Africa Gateway and the five pillars is facilitating a regional integration model in Africa. This model is more inclined towards market integration as opposed to development integration. Development integration can be understood as the prioritisation of human development, strengthening of public finances and deepening public services to the ends of empowering state autonomy. On the other hand, market integration is closely aligned with market creation, infrastructure connectivity to promote business opportunities and harmonise regulation to accelerate and expand the private sector.

Although the Global Gateway explicitly states that the EU ‘aims to forge links and not create dependencies’, the overall investment approach is rooted in the private finance first model, which entrenches Africa’s financial dependency on international markets.  Laying emphasis on the ‘crowding in’ of the private sector, this investment model ultimately rewards private actors in their quest for greater profit. The sectoral emphasis encapsulated by the five principles of the Gateway acts as an engine for accelerating market integration in African countries.

An Investment Package which works for Africa

The Gateway could be an effective conduit for channelling investments into social and physical infrastructure which supports the needs of African populations, as opposed to market creation. One concrete way of achieving this would be  to focus on strengthening the role of public development banks to finance African public goods. This can be done in conjunction with lifting the intellectual property waiver on vaccines and reallocating developed countries’ unused SDRs to mitigate the devastating impact of the multiple crises that African countries currently face.

Such an approach is not detrimental to the interests of the private sector. In fact, public financing of development integration  can give way to select avenues of market integration, which support the private sector, when steered and led by African states, based on the principles of consultation, transparency and accountability. Investing in a strong welfare model  in African states is key to a growth model which caters to both public and private interests. A vision of African Developmental States, as proposed by the late economist Mkwandawire, proposed strong social policies as a precursor to good governance and strong economic growth.

The EU’s role as an equal partner in trade, investment and development with Africa through the Gateway needs to start from a position of transparency. Grants, guarantees and the role of the private sector needs to be clearly differentiated, demonstrating the distribution of gains between the public and private sector. The EU plays a key role in the institutions that decide on sovereign debt of African countries. Renewed partnerships can only be built through recognising the unequal and problematic nature of these institutions and implementing  processes and mechanisms for fair debt workout mechanisms. Finally, as already expressed by African and European Civil Society Organisations (CSOs) in a joint statement, civil society on both continents should be equal stakeholders in all consultations, discussions and debates leading up to final decision making.