This blog was originally posted on the Global Partnership website here.

Before the COVID-19 pandemic the world was already facing unprecedented levels of humanitarian crises, with over 134 million people in need of assistance and protection. Two years later, this figure has more than doubled with 274 million people in need of humanitarian assistance and protection in 2022. The current crisis in Ukraine is now adding additional challenges to an already complex environment.

In this context, the need for Official Development Assistance (ODA) has been thrown into even sharper relief, as millions of people are pushed back into poverty and gains made towards achieving the Sustainable Development Goals (SDGs) are being reversed in many countries in the global south.

At the end of this year, the 3rd High-Level Meeting (HLM) of the Global Partnership for Effective Development Co-operation, also known as the 2022 Effective Development Co-operation Summit, will meet in Geneva.  This is an opportunity to take meaningful action to ensure that the maximum possible amount of aid helps those that most need it. The untying of aid is crucial to this.

Our report “Strings still attached: Unmet commitments on tied aid”, which was published last year, found that in 2018 (latest available data on this matter) members of the Organisation for Economic Co-operation and Development’s Development Assistance Committee (OECD DAC) reported some US$26.9 billion of tied aid. This is aid where donors require that the funds are used to procure goods and services from suppliers in the country providing that aid. This totalled 21 per cent, or more than one in every five dollars, of bilateral and EU aid reported as tied. And these figures are just the tip of the iceberg.

Even where DAC members do not formally tie their aid, the procurement processes - the purchasing of goods and services by governments to implement public projects or provide public services - can still create informal barriers that make it difficult for suppliers outside the donor country to access contract opportunities. For example, in Madagascar, an informant described a contract for solar panels at a hospital, commenting: the contract specified components that were only manufactured by a company in the donor country.

A key way to detect informally tied aid is to follow where contracts are actually awarded in practice. Our report finds that 52 per cent of all untied contract awards reported to the DAC were awarded to suppliers in the DAC member’s own country. In contrast, only 11 per cent of reported untied contract awards went to suppliers in Least Developed Countries (LDCs) and Heavily Indebted Poor Countries (HIPCs).

When looking at trends between 2009 to 2018, we can see some modest improvements on the percentage of contracts flowing to LDCs/HIPCs. However, the overall data does not suggest major shifts - suppliers from the global south keep losing out relative to suppliers in DAC members’ own countries (see graphic below).

Percentage of ‘untied’ contracts awarded to suppliers in the DAC member country vs. in the global south (analysis by value) 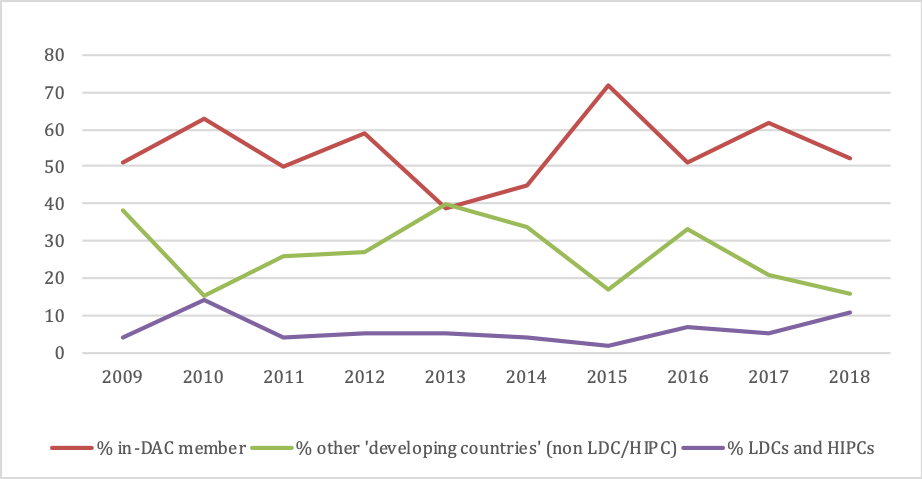 Source: Analysis of OECD DAC, 2020 Report on the DAC Recommendation on Untying ODA, Table A9. Totals do not sum to 100% because, for the sake of simplicity, contracts to other donors have not been included in the chart. These represented 8% of all reported contracts (by value) in 2018. Please refer to Annex 3 for more information on the data and methodology used.

Drawing on this data, we estimate that the total level of formally and informally tied aid in 2018 was at a minimum US$32.3 billion (potentially up to US$37.9 billion depending on the assumptions used). These findings translate into very real costs for people in the global south. We estimate that in 2018 alone, the direct short-term cost of tying was at least US$2 billion and potentially as much as US$7 billion (further detail is available in our report). These are aid resources diverted from key development priorities such as the provision of essential services.

A time for action

We know that development is more impactful when led by local priorities and channelled, where possible, through country systems and actors, thus when aid is untied. Back in 2001, followed by updates in 2014 and 2018, donors signed up to a (limited) agreement on aid untying, that aims to untie ODA to LDCs and HIPCs to the greatest extent possible. The untying of aid is high in the agenda of the Global Partnership for Effective Development Co-operation, as well, and has been addressed throughout the years (for example, back in 2016 with the Nairobi Outcome Document, where donors committed to accelerate the untying of aid). Yet, the data available offers little evidence that DAC members have made sustained progress towards this longstanding commitment.

The GPEDC Monitoring Framework is currently under review, and is a key opportunity for members to expand the scope for indicator 10 – that aid is untied, by including a systematic reporting on the values of contracts awarded to companies in different countries, in addition to data on formal tying. Improved monitoring of tied aid will not solve all obstacles. However, it could provide a new way of approaching aid procurement – one that support local producers, which could trigger a “double dividend”, in addressing poverty and inequalities and building up the local economies in the long term.

Ahead of the Effective Development Co-operation Summit in December, it is critical to see the GPEDC generating momentum to push development partners to fulfill their development effectiveness commitments so they can better deliver on effective development and the achievement of the Sustainable Development Goals. The current context of pandemic, a deepening climate emergency, conflict and many related economic shocks more than justifies it.