This second part of our two-part blog series provides an assessment of the G20 Debt Service Suspension Initiative announced last week. Part I analyses the impact of the proposal on fiscal responses to Covid-19. Part II places the initiative in the context of the broader economic costs of the crisis for developing countries.

In the first part of this blog series, we examined the impact of the G20 Debt Service Suspension Initiative (DSSI) on emergency responses by the world’s poorest countries to the Covid-19 pandemic. While the DSSI provides some room to bolster the response to the crisis, it is clearly insufficient. The trifling nature of the initial multilateral response is further exposed once the impact of the crisis on public debts is taken into account. This highlights the need to begin discussions on additional mechanisms to relieve the acute financial pressures faced by developing countries as a matter of urgency.

The crisis is expected to have a substantial impact on debt levels in countries that are eligible for the G20 DSSI. As economic growth falters and fiscal balances deteriorate, public debt for these 36 countries is expected to surge from US$ 1,027.9 billion in 2019 to US$ 1,214.4 billion in 2021.  This represents an increase in average public debt levels from 49 per cent to 55.3 per cent of Gross Domestic Product (GDP) between 2019 and 2021. The evolution of debt levels is consistent across debt distress risk groups, as defined by the International Monetary Fund (IMF) (see Figure 1). The widespread impact of the crisis highlights the need for universal support measures – such as scaling up available Official Development Assistance (ODA) flows as well as debt cancellation – to head off a looming humanitarian, economic and political catastrophe.
Figure 1: Public debt as a share of GDP in G20 DSSI eligible countries (2019-2021) 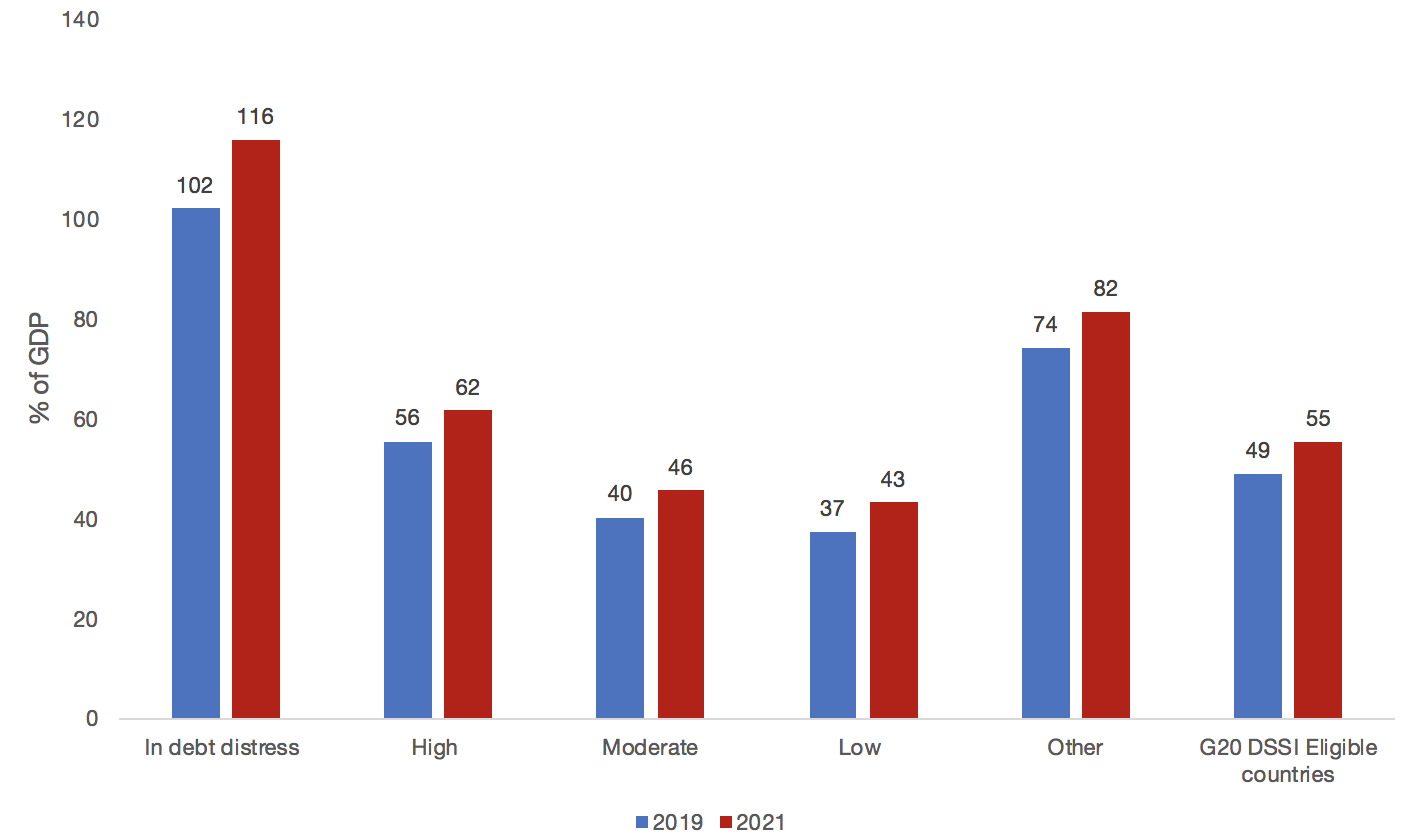 Source: IMF Fiscal Monitor (2020)
These projections are likely to represent the lower boundary of the costs of the crisis. The increase of public debts relies on an optimistic assessment of macroeconomic and fiscal developments for three reasons. First, as analysed in our previous blog, G20 DSSI eligible countries are expected to restore pre-crisis growth rates while undergoing fiscal consolidation in 2021. Given the negative impact of fiscal consolidation on economic growth, it is likely that public debt ratios will increase further. Second, all of the emergency financing is being provided as loans. Large-scale loan financing is expected to have a substantial negative impact on debt ratios. Third, governments will still have significant ongoing public expenditure needs linked to the pandemic, and will still be dealing with the multiple impacts of the global recession. Fiscal consolidation will be neither politically nor morally tenable.
The combination of falling revenues, currency depreciations and rising interest costs on public debts from commercial sources are set to cause a sharp increase in debt burdens. The share of tax revenues used to pay interest on debt is set to increase for low-income countries (LICs) from 19.8 per cent in 2019 to 32.9 per cent in 2020. This situation is likely to deteriorate going forward. Interest rate payments on new borrowing to respond to the crisis are only going to increase the pressure on public budgets.
In coming years, additional interest expenditures could reach an equivalent amount to the short-term reprieve secured through the debt suspension in 2020. It is even more troubling than the expected payments on the suspended debt service will be due at a time when existing external debt service obligations for developing countries will require US$ 4,482 billion between 2022 and 2024. LICs are being set up for a major struggle when it comes to financing the provision of basic public goods to guarantee the full realisation of all economic, social and cultural rights, including the right to health for their populations.
Against this backdrop, the G20 debt service suspension is akin to using a band aid to stop a life threatening haemorrhage. The overall dynamics of public debt and interest payments highlight the lack of ambition and long-term costs of the G20 announcement. Without a cancellation of debt service for 2020 and a broader debt relief initiative, the Covid-19 health crisis will morph into multiple humanitarian, economic and political crises across the developing world.
Sliding into an attitude of complacency is a waste of the brief window of time created by the G20 DSSI. An honest discussion on the outlines for a plan to deal with systemic insolvency in developing countries needs to start as soon as possible. A plan needs to include elements such as the cancellation of the suspended payments of the G20 DSSI, binding mechanisms to guarantee the participation of private and multilateral creditors, establishment of legal protections for countries under IMF programmes, and a Sustainable Development Goal (SDG) debt relief initiative, as proposed by the UN Conference on Trade and Development (UNCTAD).
We can no longer afford to sideline much-needed reforms of the international financial architecture to ensure orderly, timely and fair debt crisis resolution. Doing the minimum and hoping for the best does not constitute a viable long-term strategy.