G20 debt service suspension: A response not fit for purpose (I)

This blog series of two parts will provide an assessment of the G20 debt service suspension initiative announced last week. Part I analyses the impact of the proposal on fiscal responses to Covid-19. Part II places the initiative in the context of the broader economic costs of the crisis for developing countries.

On 15 April, the G20 announced an agreement to suspend public external debt service for a group of 77 developing countries to help tackle the Covid-19 crisis. The G20 Debt Service Suspension Initiative (DSSI) will involve the postponement of up to US$ 12 billion in payments by the world’s poorest countries to official bilateral creditors until the end of 2020. The initiative does not cover multilateral and external private creditors. In order to benefit from it, countries must request support from the International Monetary Fund (IMF) and they are expected to pay back the missed payments to their creditors over a four-year window.
The announcement is a positive development. However, an assessment of its implications in the context of the broader challenges faced by developing countries shows it is a response that is not fit for purpose. While the debt suspension offered provides some room to support the emergency response to Covid-19, this is limited by two factors.
Debt service payments to the remaining multilateral and private creditors will divert a substantial share of resources.
The short-term nature of the support being provided may force some countries to impose widespread austerity measures as soon as 2021.
From this perspective, we believe the G20 DSSI does not go far enough. The initiative could potentially help to double emergency fiscal response in some countries. However, that possibility is undermined without all creditors being involved in debt relief - and without debt payments being cancelled, not merely postponed.
Impact of G20 debt service suspension on short-term fiscal space in low-income eligible countries
An analysis for 36 countries eligible for the G20 DSSI helps to put the initiative in context1.  Before the announcement, eligible countries were projected to respond to the crisis with fiscal measures equivalent to an average of 2 per cent of Gross Domestic Product (GDP)2.  This is explained by two factors. First, economic growth for these countries is projected to decline from 4.5 per cent to 0.3 per cent between 2019 and 2020. This, in addition to the sharp drop in commodity prices, is expected to cause a reduction of government revenues of 0.9 per cent of GDP. Second, expenditure measures to address the health and economic fallout of Covid-19 are projected to represent an additional 1.1 per cent of GDP (see Table 1).

Sources: IMF WEO (2020). IMF Fiscal Monitor (2020). Eurodad (2020).
For comparison, G20 countries have announced fiscal measures for 3.5 per cent of GDP and financial support measures for an additional 6.9 per cent of GDP. Given the need to scale up the capacity of healthcare systems and introduce social safety nets for the most vulnerable in eligible countries, the fiscal response to the crisis is clearly insufficient. The lack of stronger measures to tackle Covid-19 is directly linked to external and domestic financial restrictions, such as high levels of debt, declining Official Development Assistance (ODA) flows and low tax revenues.
In this context, the G20 DSSI has the potential to provide additional resources to bolster the emergency response. If the resources freed up were used to expand expenses related to Covid-19, beneficiary countries could increase expenditures on average by 1.5 per cent of GDP in 2020. For at least 21 countries, the G20 DSSI could provide fiscal space to effectively double the size of their emergency response programmes (see Figure 1). For some countries, such as Nicaragua, Madagascar and Pakistan, the suspension could help to further increase expenditure in response to the crisis. For some others, such as the Republic of Congo, Nigeria and Zambia, the suspension could help to reverse some of the projected reductions in expenditure that are taking place as a result of the drop in commodity prices. 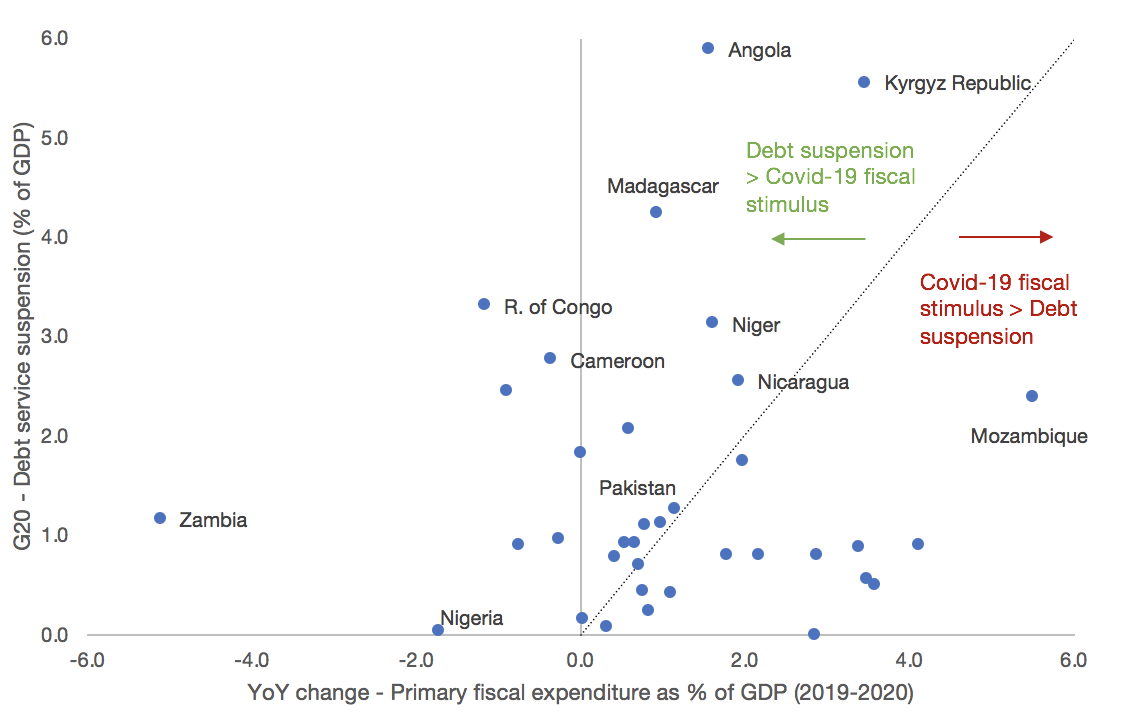 Sources: IMF WEO (2020). IMF Fiscal Monitor (2020). Eurodad (2020).
However, it is unlikely that eligible countries will be able to redeploy all of the resources freed up by the G20 DSSI to tackle Covid-19 for at least two reasons. First, these countries still have to meet their public external debt service obligations to private and multilateral creditors. The decision not to include these creditors as part of the initiative has a significant impact on the allocation of resources. Debt service for these creditors represents on average 0.9 per cent of the GDP of eligible countries. This is equivalent to 62 per cent of the G20 debt suspension (1.5 per cent of GDP) (see Table 2). For at least 10 countries, including Ethiopia, Ghana and Kenya, debt service to other creditors is higher than the potential relief offered by the G20. For these countries, the G20 DSSI doesn't bolster Covid-19 response efforts. It simply facilitates repayment to other creditors.

Table 2: G20 debt service suspension and debt service to multilateral and private  creditors in 2020 (% of GDP)

Sources: IMF WEO (2020). IMF Fiscal Monitor (2020). Eurodad (2020).
A second factor that will limit the benefits of the G20 DSSI for eligible countries is the short-term nature of the support being offered. The lack of commitment by the international community to provide long-term financing reduces the likelihood that countries will be able to redeploy all available resources towards emergency response efforts. This restriction is clearly reflected in the fiscal projections of the IMF for 20213.  At least 33 countries are expected to either raise revenues and taxes or lower expenditures as early as next year. In the case of revenues, 28 countries are expected to take measures, including tax increases, to raise an additional 0.6 per cent of GDP in 2021 (see Figure 2). Regarding expenditures, 22 countries are projected to reduce government spending by 0.6 per cent of GDP in 2021 (see Figure 3). For the 22 countries reducing expenditures, the average cuts represent 1.1 per cent of GDP. The widespread and significant character of the projected measures makes it clear that, rather than representing a clean break from previous patterns of crisis management, the IMF is doubling down on its traditional role as the enforcer of austerity. 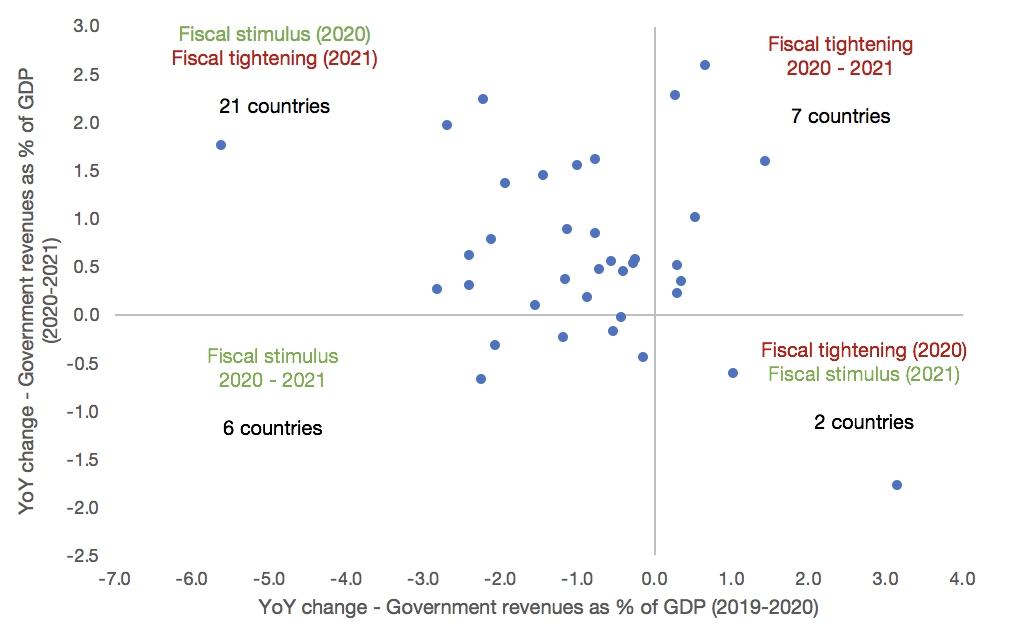 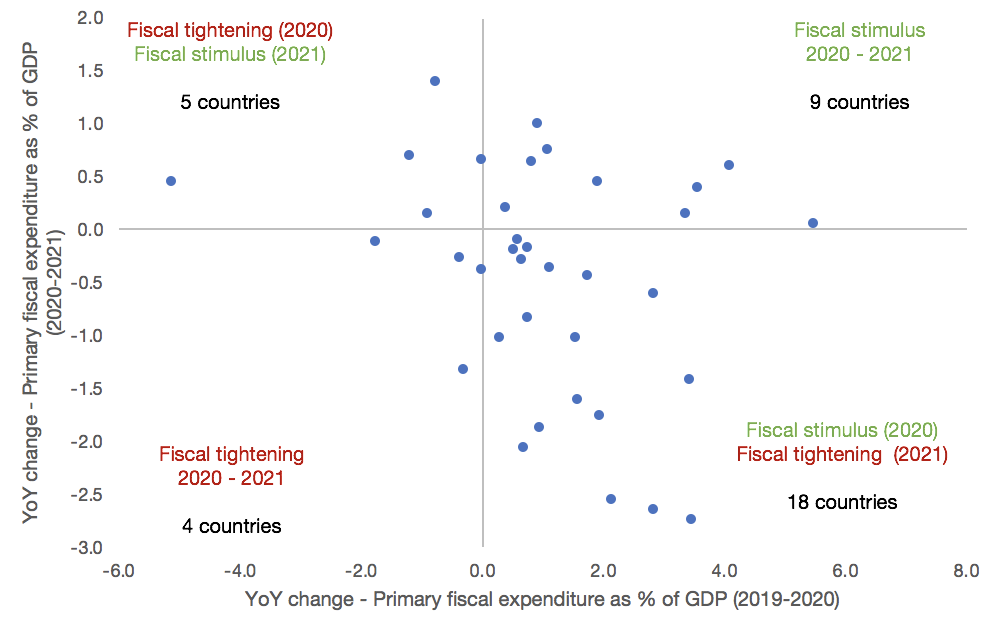 Sources: IMF Fiscal Monitor (2020).
The assessment of the G20 DSSI relative to its impact on fiscal responses to Covid-19 highlights significant limitations and raises several issues:
The next part of this blog will assess the G20 debt suspension initiative in the context of the broader impact on debt and debt burdens in eligible countries.

1 Country selection based on data availability for both the IMF World Economic Outlook (WEO) and IMF Fiscal Monitor for April 2020. Remaining 40 countries included in the G20 DSSI do not have updated data. Sources for all figures in the article are from these databases, unless otherwise noted. For the complete list of countries, refer to the Annex.
2 As measured by the change of the primary fiscal deficit between 2019 and 2020. Primary fiscal deficit is defined as the balance of revenues and expenditures, excluding interest payments.
3 The IMF has warned of the need to take current projections with a healthy dose of scepticism given the high degree of uncertainty surrounding the global economy. However, projections can be understood as a declaration of intentions of the IMF in a context where they will have substantial influence as a result of the large number of countries requesting financial support.

The clarion call for climate finance at COP27