The use of private sector instruments (PSI) has raised many questions regarding its ability to reach those most in need. Through this blog, we provide an overview of the findings of a new Eurodad report analysing the latest PSI data.

Official development assistance (ODA) plays a fundamental role in an increasingly complex and expanding development finance landscape and is uniquely placed to support the needs of the poorest and most vulnerable people in the world. The need for ODA has been thrown into even sharper relief in the midst of the current Covid-19 crisis, which is pushing millions of people back into poverty and reversing the gains made towards achieving the Sustainable Development Goals (SDGs) in many developing countries.

In 2018, the group of international donor countries that sit on the OECD’s Development Assistance Committee (DAC) agreed to provisional ODA reporting arrangements for private sector instruments (PSI). These instruments include loans, equity investments, mezzanine finance provided to private sector enterprises, and guarantees extended to financers who back them.

The use of PSIs has raised many questions within the civil society community regarding its ability to reach those most in need and, as a consequence, the diversion of scarce ODA resources from where they have most impact. For example, from supporting domestic governments to strengthen those sectors that are proven to best tackle inequality – such as public health, education and social protection, or to raising taxes progressively and spending them in an accountable manner. The reporting arrangements are now expected to be revisited in 2021, given that no permanent rules have yet been finalised.

Today, Eurodad is launching Time for Action: How private sector instruments are undermining aid budgets. This report analyses the agreements and commitments made to date by DAC members on the topic of ODA and PSIs, their implications and the main issues at stake. It also provides an analysis of the most recent data available, including 2019 PSI data released just last week.

The analysis of the data tells us that ODA levels have been stagnating in recent years, and the proportion of ODA actually transferred to developing countries is decreasing. ODA levels as a share of DAC countries’ Gross National Income (GNI) have been stuck at around 0.3 per cent since 2005 – not even half-way to the long-standing United Nations target of 0.7 per cent. This is not expected to change in the coming months, in spite of the dire straits many developing countries find themselves in.

While ODA resources are not growing, the share of ODA reported as PSI is. Between 2018 to 2019, the share of PSI ODA increased to 2.2 per cent (or to 3.1 per cent in bilateral ODA). Some may think this looks rather small but the scale is significant when compared to allocations for specific purposes or sectors. 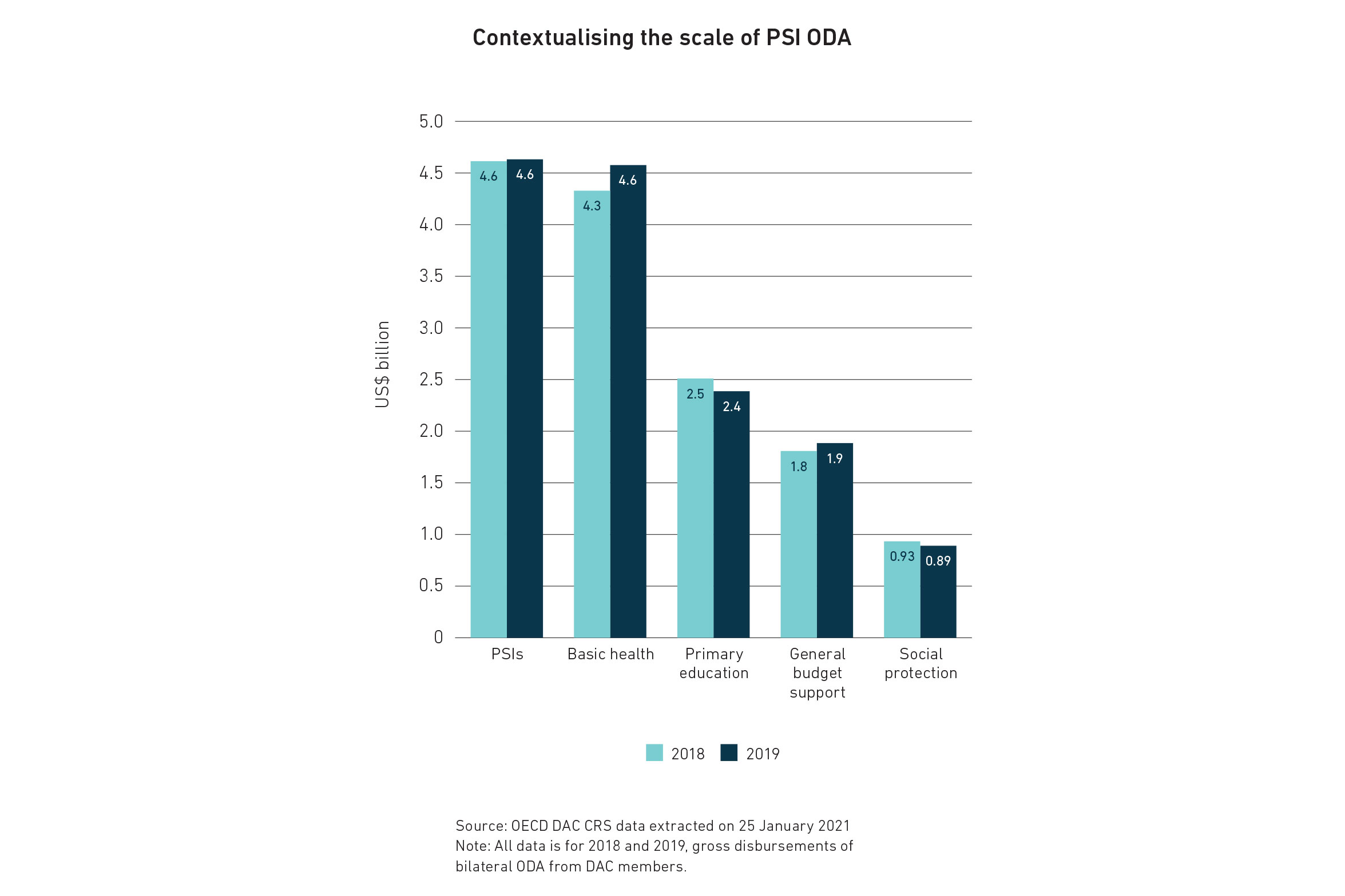 These are only a few of the challenges highlighted in Eurodad’s new report. The analysis of the data highlights several issues that civil society organisations (CSOs) have been consistently raising in relation to the implications for the quality and quantity of ODA. Under the current PSI rules, there is a risk of diluting the distinctive role and value of ODA compared to other types of development finance sources; a potentially weaker evidence base could be established on which decision-making on ODA allocation would be made; and transparency and accountability standards could be compromised.

So far DAC members have shown little interest in resuming negotiations. Some fear an outcome worse than those defined by the current interim rules; others fear another round of long discussions and negotiations – wondering if this would be the best use of DAC resources. It also seems clear that DAC members’ positions will not have changed much since the last round of negotiations. However, as the report illustrates, the stakes are too high for these reservations to go unchallenged.

Maintaining momentum on PSIs is critical and CSOs have an important role to play by:

Keeping up the pressure on DAC members to resume negotiations.

Stressing the need for the donor community to provide evidence that justifies the inclusion of PSIs in ODA. While the evidence is still insufficient, CSOs should continue to advocate for PSIs to be reported as Other Official Flows.

Maintaining the spotlight on the continued need for non-PSI ODA and reminding the donor community about the longstanding commitment to provide 0.7 per cent of GNI as ODA, on concessional terms.

Ensuring ODA is allocated to its most effective use. Public investment in key social, economic and governance areas is a fundamental precondition for private sector development and private investment.

Contributing towards nuancing the conversation regarding the role of the private sector, by gathering evidence and analysis that contributes to more informed discussions on the impact of PSIs on eradicating poverty and inequalities, environmental and development sustainability and on ‘leaving no one behind’.

In addition, CSOs should call for an external review of the whole ODA modernisation process and its impact on the quality and quantity. Such a review should look into the expansion of the ODA concept, its definition and related reporting rules.

DAC members should not miss the opportunity that this review of PSI brings. They should go back to the negotiating table with raised ambitions. With the deadline for achieving the SDGs rapidly approaching, taking stock of the implications of the impact of PSI rules should be a top priority.