How are climate and debt interconnected?

The impacts of the climate emergency in the global south exacerbates the debt problems in climate vulnerable countries. This is because most countries have little or no option other than borrowing to deal with recovery and reconstruction costs after a climate extreme event or environmental hazard (see glossary).

When an over-indebted country is affected by an extreme climate event, existing debt makes it more difficult for that country to respond to the emergency needs. The impacts also extend into the future, as pre-existing debt, together with the costs of reconstruction worsen the chances of economic recovery. The coexistence of high debt and climate extreme events also makes it more difficult for the country to repay the debts it already owes.

Over the last decade, climate finance (see more details in questions 3-5) has mostly been provided through debt-creating instruments. Continued use of loans to fulfil climate finance obligations sharply reduces a country’s ability to achieve fiscal stability and debt sustainability, and helps to fuel the debt crisis in the global south. This in turn impacts on a country’s ability to provide adequate public services during the ongoing health crisis and in the wake of a climate extreme event; public services that are greatly needed particularly by marginalised groups including women, children, indigenous peoples and the transgender community.

Furthermore, climate vulnerabilities increase the costs of borrowing from private creditors for countries in the global south. This recent report shows how climate risks increased the cost of debt for the countries in the Vulnerable Twenty (V20) group, adding US$ 40 billion of additional interest payments over the past 10 years – US$ 62 billion if we include the private sector. Over the next decade, this number is set to increase to US$ 168 billion. The higher the existing debt, the more reluctant creditors will be to lend to a country already struggling with payments and climate vulnerabilities, and if they do, the interest rates will be higher.

There is also a debt-induced climate impact. High public external debt levels translate into more revenues spent on servicing that debt. This makes it more difficult to invest limited domestic resources in climate adaptation and mitigation, or to respond to the challenge of loss and damage after a climate extreme event. Furthermore, when a country is struggling to repay its unsustainable debts, it might look for options that include exploiting its natural
resources, including fossil fuel, mining or forests, in order to increase exports and therefore revenues, that it will then use to repay its debts. This, in turn, contributes further to climate change by facilitating, for instance, desertification.

This trend is especially worrying in the aftermath of the Covid-19 crisis, when an increasing number of countries in the global south are facing a surge in their public debts. With more debt and no relief in sight, developing countries will be forced to implement austerity measures on an unprecedented scale. In fact, a large number of countries in the developing world are already allocating more resources to debt service than to either public health care or education. According to IMF projections (analysed by Eurodad), primary expenditures will contract below pre-crisis levels in at least 60 countries by 2025. The widespread decline in expenditures runs counter to the investments required to meet the commitments under the 2030 Agenda, the Beijing Declaration and the Paris Climate Agreement.

In conclusion, the countries that struggle the most with debt tend to be more vulnerable to the impact of climate change: on the other hand, climate change exacerbates debt vulnerabilities. This is extremely problematic as it creates a vicious circle. 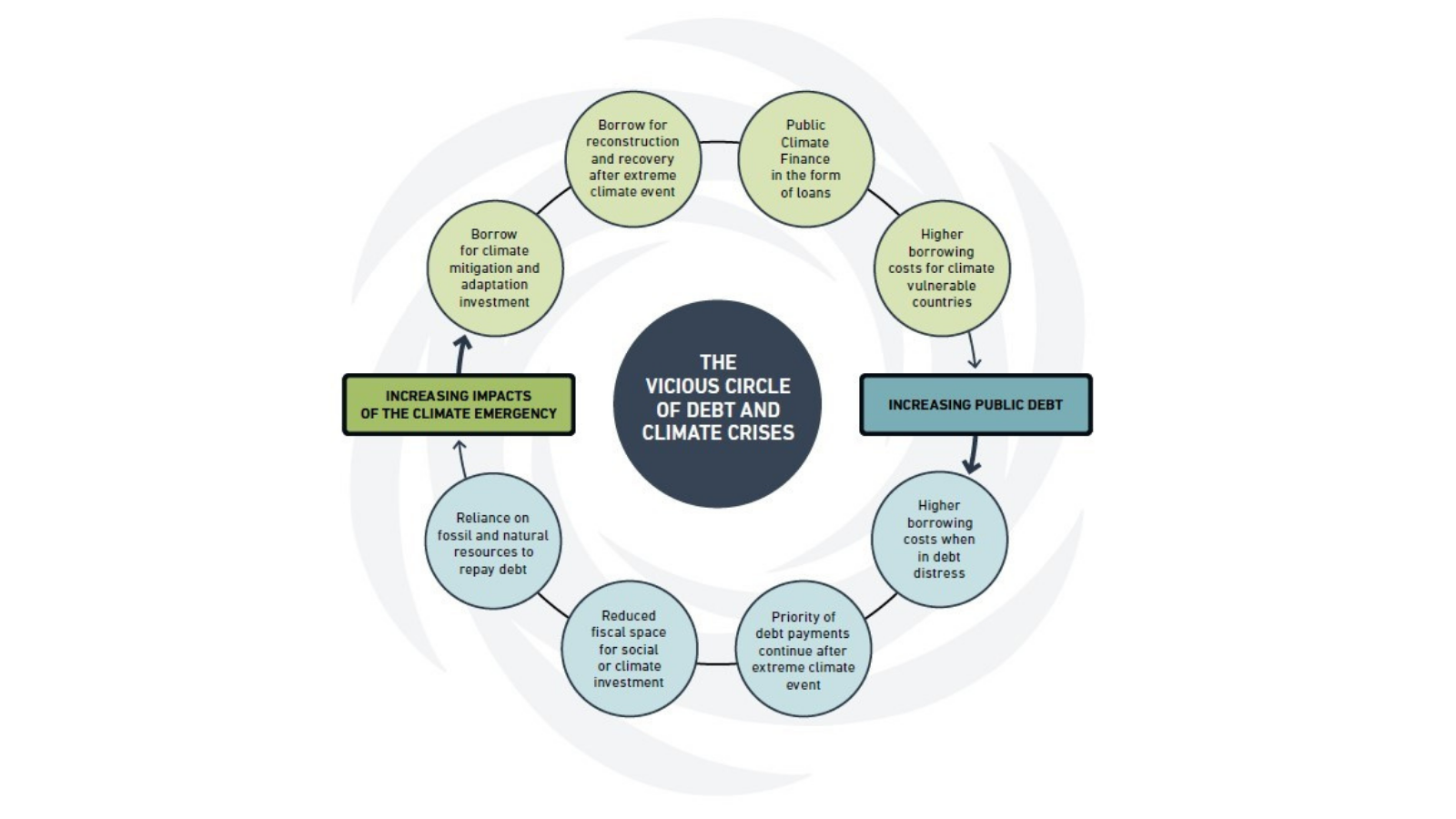