What's wrong with climate in relation to the debt crisis?

The world’s poorest countries and communities should not be forced to take out loans to protect themselves from the excess carbon emissions of rich countries.

We’ve seen that countries in the global north offer climate finance mostly in the form of loans, not grants, increasing the level of indebtedness of recipient countries in the global south (see Question 1). In fact, according to the OECD, between 2013 and 2019 two thirds of public climate finance was delivered through loans. Loans accounted for 60 per cent of bilateral and 88 per cent of multilateral finance. Between 2013 and 2019, the amount of grants available for developing countries have apparently changed, from US$10.3 billion to US$16.7 billion, but loans have increasingly been reported as public climate finance. Countries in the global south therefore end up paying for the climate mitigation of and adaptation to a problem that they have not caused, as those loans ultimately need to be repaid

Beyond lending, over the last decade, other tools have been put in place to address mitigation needs or the impacts of climate change and the financing needs that arise after a climate-extreme event. Most of these instruments are market-based options, such as green bonds, risk insurance or catastrophe bonds, usually non-compliant with a human rights-centred approach. A human rights based assessment of these tools by Action Aid International reveals that they put the financial burden back on developing countries, increasing debt and worsening the fiscal imbalances; not to mention that they fail to enhance accountability and transparency.

In order for climate finance to adequately support vulnerable communities’ efforts to tackle climate change and develop sustainably, the climate finance agenda must be driven by the most vulnerable,  considering not only climate, gender justice and human rights aspects, but also the impact on the indebtedness of the country, in order to tackle the multiple layers of these interconnected crises. Democratic country ownership is key for vulnerable countries to address their local needs. This entails developing a common strategy between climate-vulnerable countries that balances needs and interests, as opposed to prioritising the interests of the climate finance provider. Also, it would require disbursing funds to both governments and civil society organisations, in particular to those who are locally based, women-led or with a focus on the indigenous population, as they are best placed to reach affected communities.

Accountability and transparent reporting is strictly linked to debt, because the majority of public climate finance is provided in the form of loans. Nevertheless, at the moment loans can be reported as if they were directly equivalent to grants, which is incorrect and misleading. The grant equivalent must be reported, particularly with regard to concessional loans, instead of simply reporting the ‘facevalue’ of finance provided. 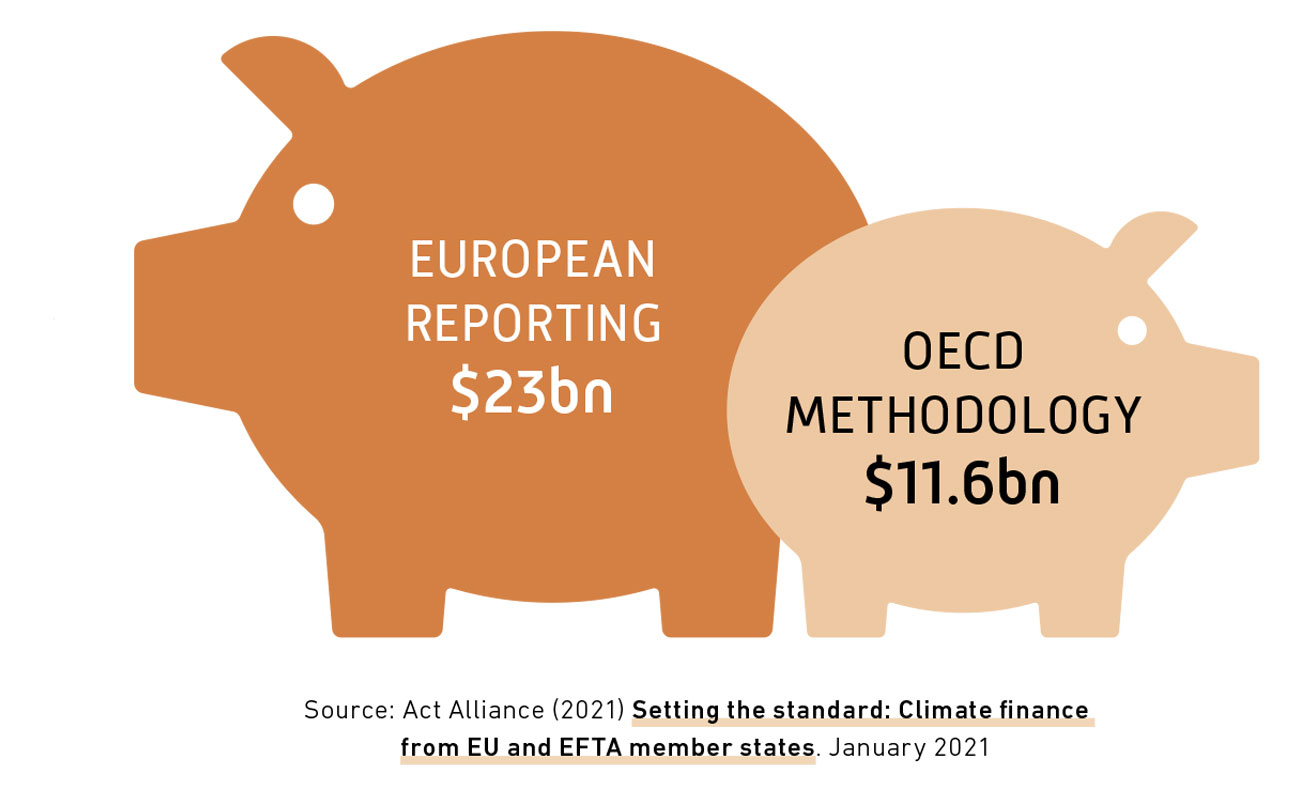 Climate finance must also be “new and additional”, and a consensus must be reached on what that means. A recent analysis looks at OECD countries’ climate finance between 2009 and 2018, and concludes that almost half of the reported amount was not additional “and largely came from the re-badging or re-focussing existing development efforts. Several countries—including Canada, Spain, and the US—actually reduced their finance levels over the period”. New and additional means that funds for climate finance cannot be diverted from other areas, such as official development aid, where they are also much needed, particularly in post-Covid-19 times.